Version 0.8 coming soon, but not today. 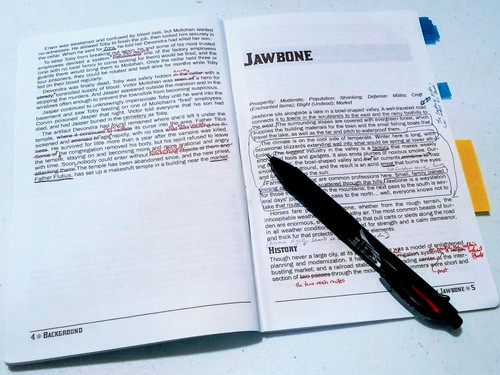 Almost done with v0.8! This version is mostly about making the section organization more consistent and navigable, clarifying and tightening the text. It's not going to look very different; I'm still working in LibreOffice Writer. Once the text is done, I'll move over to Scribus and lay it all out nicely.

I absolutely have to get it uploaded by the end of the month, because then I have to get to work on the TWO new games due in September:

- Unincorporated, a GMless story game about petty small-town drama and being stuck with a reputation you've long since outgrown. You'll be seeing an early beta version of this in the first half of September.

- My so-far-untitled Rainbow Jam 2019 game, which will be more or less a hack of For the Queen. Or at least, that's where I'm starting. I have no idea where it will end up, but the jam deadline is September 8th at 5:59 PM, so there'll be an extremely rough draft of whatever that is available right around 5:58.

So. Busy few weeks ahead.


ETA: A playtest version of Unincorporated is now available. The Rainbow Jam game, which ended up being titled You Don't Belong Here, is unsalvageable trash and I won't be updating it in the foreseeable future, so it's no longer available.

Get Stuck in Jawbone